THE EFFECTS OFMEDITATION  UPON GROUPS IN THE WORLD 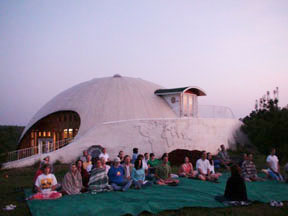 In recent years there are more and more groups practicing prayer, affirmations, intentions and meditation toward healing the planet, especially those experiencing natural disasters, economic or political unrest, or war and terrorism. Thanks to the Internet it is becoming easier to connect with people from all over the world to come together for synchronized sending of thoughts, prayers and meditations with the belief and expectation that these practices are making a difference in these times of transition.

The idea that prayer and meditation can bring wholeness, sanity and well-being to our planet is not a new one. At some point in my research of meditation I found a passage stating that the original purpose for monasteries was to heal and stabilize the planet.(origin unknown) The monks were aware of the power of a group doing this, thus spiritual and compassionate beings grouped together away from the world to ignite and empower their thoughts and prayers with light and love for a suffering and desolate world. These individuals devoted their lives to repeating daily, and in come cases continuously, prayers, holy words and times of silence not just for themselves or for the continuation of a certain religious belief but for the well-being of others.

Of all these compassionate groups the Tibetan Buddhists are the ones who have kept this tradition alive in their practices. To this day the Tibetan Buddhists have continued a particular prayer they have chanted for centuries. This prayer is “May all sentient beings be happy and free from suffering.” There are other holy words called mantras that are chanted for the sake of healing. These are “Om mane padme hum” and a chant entitled the Medicine Buddha.

In recent times, and in our western world, more and more groups are joining together for intentional thought an meditation for the well-being of others. There are only a few groups who are tracking what they do from a scientific perspective. Studies of the effect of prayer upon individuals and groups, shows evidence that those who are being prayed for get better more quickly than those who are not being prayed for. Groups such as the Institute of HeartMath have organized the Global Coherent Initiative. This initiative is in the process of constructing a global monitoring system whereby 12 sensors strategically located around the world can track the effects of the relationship between collective human emotions and behaviours, the earth’s magnetic field and planetary changes. (1) The potential to scientifically track just how intimately we are connected to each other and our universe looms on the horizon of our consciousness.

A study In September, 2009 tracked the effects of intentional thought upon an area of the world. Lynne Mactaggart along with several distinguished scientists conducted a study called the Peace Intention Experiment. They chose a remote area of Sri Lanka where civil war had been going on for over 25 years. The area chosen, called the Wanni section, was a stronghold of the rebel Tamil Tigers, the well-armed and trained rebel forces, and the center of terrorist activities. During the week of this project violence in this area actually escalated, but the week following this project violence diminished greatly. The question was why did the violence escalate during the week of the project. According to the research there are three possibilities. “It could be (1) coincidence, (2) our intention to lower violence had the effect of accelerating the army’s victories over the rebels so that further violence would end, or (3) our intention made things worse before they got better.” They concluded in order to understand this further more experiments need to be conducted. To date I’m not aware of any further peace intentional experiments by this group. (2)

Probably the most well-known experiment of a group meditation for the well-being of others was the one conducted by the Transcendental Meditation programs in Washington D.C. in June – July 1993. The theory was that if 4,000 practitioners of Transcendental Meditation and the TM- Siddhi program meditated for a two month their efforts would bring the crime rate down ten percent. The crimes documented in this study were violent crimes including homicide, rape, aggravated assault, and robbery. According to the data, the group began with about 600 meditators and increased each week. It was not until the fifth week where the number of meditators increased to about 2500 that the crime rate began to decrease significantly (6%) and continued to decrease as more and more meditators were added. By week 7 there were 4000 meditators and the crime rate had decreased by 16% and then to 24% by the end of the eighth and final week. Their findings were that with the increase in the numbers of meditators the more powerful the effect on the crime rate. This decrease also lasted beyond the time of the study. (3) The TM people have conducted similar projects in the United States and in the world with similar results.

TM has called this effect the Maharishi effect. The name was given to the founder of Transcendental Meditation, Maharishi Mahesh Yogi. Maharishi predicted that if 1% of the population of a community practiced TM it would create a field of consciousness to improve the quality of life. With the introduction of a more advanced technique called the TM-Siddhi Yoga Program this had a more powerful effect whereby the square root of 1% of a population practicing these two techniques could “neutralize negative tendencies and promote positive trends throughout the whole population.” (4)

I don’t believe this positive effect of meditation on societies is solely unique to the Transcendental Meditation groups. I believe that all people who whole-heartedly want to improve the quality of life for all when meditating together can have the same. According to the ratio given by TM for how many people in a population can effect a change, with the world having now reached 7 billion people. one percent of the world’s population would be 70 million people, and the square root of 1% would be 8,367. – Dr. Pam Blosser (2010)

(1) “About the Global Coherence initiative”